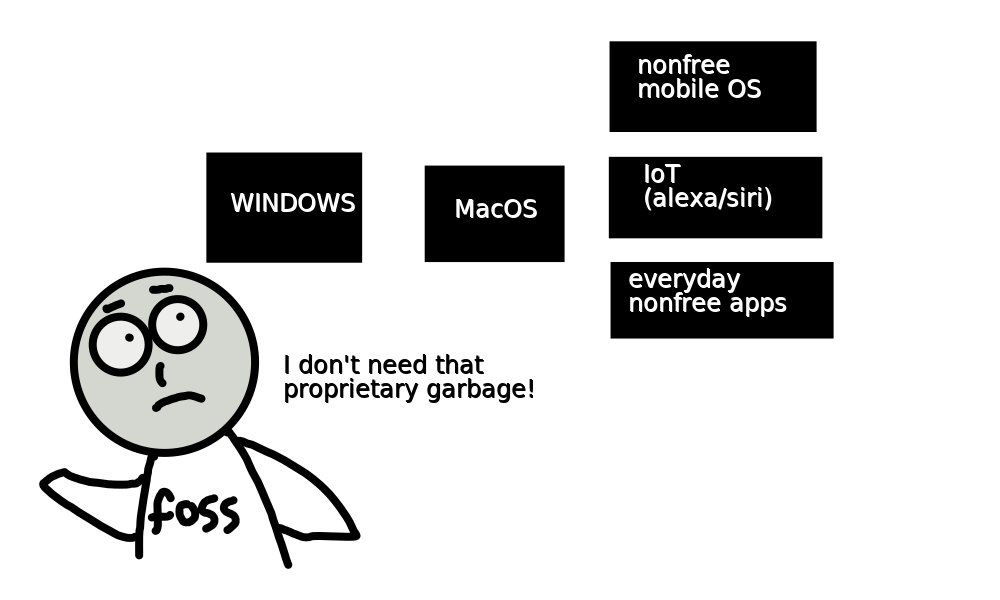 do u even stallman, bro?

For people who care about their technological freedom, privacy, and having complete control over their computing, there is no better operating system to choose than a GNU/Linux distribution (except maybe BSD). When you choose to run a GNU/Linux distribution instead of one of the operating systems that hold power over their users and force them to use non-free, closed-source software, you reclaim part of your digital freedom, and there is no better feeling than this.

Of course, a big part of the appeal of free and open-source operating systems and software applications is the fact that we can take the source code, change it if we'd like, and use it however we want to. We are then free to send our changes back to the maintainer of the project, and if they like the changes, the code could become a permanent part of the project.

Free software is great for community.

When you use free software, you know that there have been thousands of other eyes on the code, modifying it, and auditing its security. These same community members make their own changes and contributions to software projects, and entire communities can form. Many huge projects have been formed from small and simple ideas. The Linux kernel itself is a great example of the community that can form behind this ethos. Linus Torvalds wrote the Linux kernel, and then it was picked up and used in projects ranging from the GNU operating system and Android, as well as powering the biggest majority of webservers in the world. If you are an internet user, you have definitely interacted with a Linux server at some point, probably without even realizing it.

I am an unashamed distro-hopper, and am always messing around with different operating systems, usually in virtual machines these days. Here are my thoughts on some GNU/Linux distributions that I use frequently, and that I have used in the past.

I still love Ubuntu. In most of its "flavors" (that I've tried). It was my introduction into the world of GNU/Linux back in 2012, after all. Ubuntu is backed by Canonical, the company that has worked on the flagship distribution for years. The various "flavors" of Ubuntu are all the same OS with different desktop environments.

Here are some of the official Ubuntu flavors that you can try out to see how you like it.

You can find out more about the different flavors of Ubuntu at this link from the official Ubuntu website.

Being one of the most popular GNU/Linux distributions, Ubuntu or one of its derivatives are usually the entry point for newbies to the world of GNU/Linux when they come over from Windows or MacOS, so having all of these different styles to choose from helps the user ease into their newfound computing freedom.

A little on Snap.

Recently, with Ubuntu 20.04 'Focal Fossa', Ubuntu has introduced this new appstore called Snapcraft onto the world. The idea is a good one, a simple app store for GNU/Linux distributions, where people using almost any distribution could easily find an application and install it. This would make it much easier for developers to release their applications, as well, instead of having to release specific builds for specific distributions. Similar solutions have been found in options like Flatpak and AppImage.

If you want to try out a GNU/Linux distro that "just works", grab an Ubuntu image and install it on your machine and see how you like it!

Please stay tuned to this page, as I plan to add some of my favorite software packages for GNU/Linux here that you should check out, and I might eventually include some tutorials that could help people who are brand new to using GNU/Linux systems. I also intend to speak about Linux phones, such as the Pinephone and the Librem 5, which I already have a dedicated website for if you want to learn more about it.